According to some corners of our press and politics, trans people are the single biggest issue facing the British public today. But is this the reality, or an echo chamber effect amongst out-of-touch elites?

Whether it is in healthcare, sport, education or the workplace, the existence of trans people, and their continued participation in society, continues to be the source of much debate in the British press.

And this has bled over into our politics. In a worrying (and increasing) trend, we have seen some politicians build their profile on a platform of anti-LGBTQ sentiment; repeating trans-hostile soundbites as part of a wider ‘war on woke’.

But does this level of coverage, and its incendiary tone, really reflect what the British public think and feel about trans people?

The short answer is no.

The UK public is clear and consistent: trans issues are not a cause of national concern.

Whenever the British public is polled on the issues they want to see action on, trans people consistently rank at, or near, the bottom of the list.

For instance, a YouGov poll saw trans people finishing rock bottom of a closed list of 16 issues that the public felt most strongly about, with just 2% of the general public identifying trans people as their top concern. And interestingly, that dipped to just 1% of people who voted Conservative at the last General Election.

And in July 2022, the research group Opinium presented more than 500 Conservative members with a closed list of 28 issues and asked them to choose up to four they are passionate about. Trans people, and trans participation in sport, came in at 26th and 27th respectively.

So what do the British public want to see action on? The same things that they have wanted to see action on for the last 40 years: health, education, security and housing.

At a time when people are worrying how they will heat their homes, it comes as no surprise that the general public has little time for culture war techniques as a smokescreen for inaction.

Today, one in four British people is close to a trans person – attacks on trans rights are attacks on our friends, family and neighbours.

While the British public doesn’t think trans people are an issue, we need to be clear that they also don’t think that people being trans is an issue, either.

The truth is, the recent story of our nation is one of growing acceptance and love for LGBTQ+ people. We’ve come a long way since the dark days of Section 28 – when Margaret Thatcher banned the teaching of homosexuality in our institutions. Back then, Thatcher was backed by public opinion – in 1987, three-quarters of people felt that same-sex relations were ‘mostly’ or’ always’ wrong.

But today, three-quarters of people personally know a lesbian, gay or bi person, leading to a dramatic turnaround in public opinion as people got to know us as people, rather than through the lens of media stereotypes or press scandal.

Greater awareness and visibility means are now going through this same process of understanding trans people and their lives. And the effect is already being felt. Despite relentless media scaremongering, the British public is today four times more likely to feel positively about trans people as they are negatively.

Women consistently poll as being more supportive of trans people than men, showing just how out of touch with reality much of the media discourse really is.

Don’t believe us? Take a quick look at Scotland, where both the Alba and Scottish Conservative party are still licking their wounds after badly misjudging the public mood and campaigning on anti-trans lines. Both lost votes and seats to trans-inclusive parties.

All of which combines to show that the current moral panic around trans people doesn’t even qualify as a moral panic. Every time you take the conversation outside of a narrow circle of elite media commentators and politicians who obsess about trans people, all evidence shows that public support for trans people is strong.

This is a fake, manufactured moral panic. Yet this misinformation campaign poses a very real risk to the safety of trans people, and to the policies and laws that keep them safe and ensure they can enjoy the same rights as everyone else. We must ensure the voice of the majority of people who simply believe ‘live and let live’ is heard.

Take action now: let your MP know that you won’t tolerate trans people being used as a political football to mask inaction on the pressing issues that affect us all.

Use our form to send a message that attacking your friends, family and neighbours won’t win them your vote. 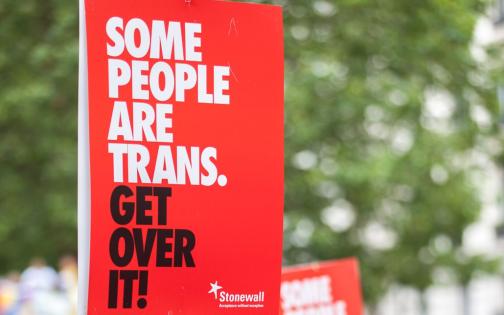