LGBT in Britain - Trans Report is Stonewall's new research, based on research with 871 trans and non-binary people by YouGov and highlighting the profound levels of discrimination and hate crime faced by trans people in Britain today. 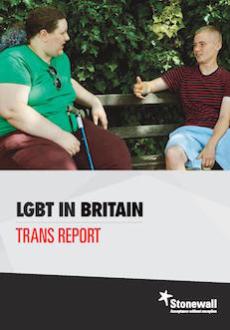 I get shouted at every single time I leave my house and threatened at least once a week. I try to closet myself from my family because I’m so close to getting kicked out.  I can’t access hormone replacement therapy without going private.  I’m disabled.  It’s a lot to deal with and I’m crumbling under the stress but I consider myself a warrior.  But really, something needs to change.

Even just five years ago it was not safe for me to come out as trans, the pace of change has been amazing. Unfortunately, there now appears to be a backlash against that progress in the last year with hate from the media against trans increasing disturbingly in the last six months. This increasing transphobia is accelerating and is causing acute anxiety in my daily life.

We are constantly questioned on our existence, treated hostilely and ridiculed in the name of debate.  We are constantly exposed to hate and criticism in the media and daily life as the public respond to the media’s attitudes.  I’m sick of being described as a mentally ill freak.

I have recently started​ at a new university. I was laughed at, ridiculed, and became the butt of jokes that normally gender me as a woman. This has been constant since day one.

Stonewall is also calling for everyone to take a visible stand against anti-trans discrimination where they find it. People can: