School Report 2017 is Stonewall’s new research with the Centre for Family Research at the University of Cambridge into the experiences of over 3,700 lesbian, gay, bi and trans (LGBT) pupils in Britain’s schools.

The study shows that while progress has been made over the last decade, many LGBT young people continue to face significant challenges in Britain’s schools. 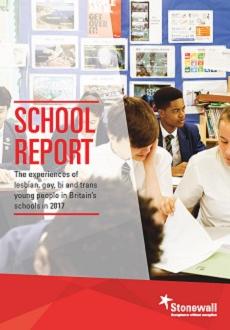 I felt like whatever I was doing was worthless. Even if I did well in school, it wouldn’t matter to people because all they would care about is me being gay.

No one I’ve spoken to at school has ever knowingly met a trans person before or been taught anything about trans people and what we might need.

Reece, 18, now in employment, Yorkshire and the Humber

Once in sex education, I asked about safe sex in same-sex relationships and I was told that it was ‘inappropriate’ and ‘that is not suitable for classroom discussion’. I was told to leave the room.