School Report Scotland is Stonewall Scotland’s new research with the Centre for Family Research at the University of Cambridge into the experiences of over 400 lesbian, gay, bi and trans (LGBT) pupils in Scotland’s schools.

The study shows that while progress has been made over the last decade, many LGBT young people continue to face significant challenges in Scotland’s schools 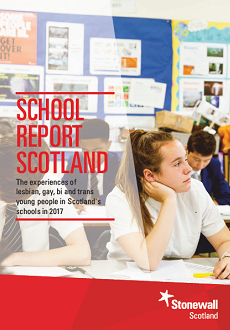 I was constantly shouted at in corridors and things were thrown at me almost every day.

I had to explain what it meant to be a trans person to my guidance teacher.

The bullying went on for years and still does. I'm totally alone and denying who I am.

Because the teachers made fun of trans people I was too scared to tell anyone about it.